Pressurized Human Occupancy Vehicles (PHOV) have certainly come a long way in the past 50 years.

The Handbook of Acrylics is a great resource for getting a better idea of what the early days were like and how the efforts then ultimately led to today’s advanced PHOVs.

Here’s what the handbook has to say: From the early 1960s there was a growing consensus in the underwater community that a transparent material could be found that would solve the panoramic visibility enigma and allow submersibles to be built from such a material.

At several Navy laboratories around the country glass seemed to be the material of choice. Many experiments and experimental hulls were proposed and, in some cases, model-scale testing occurred.

Unfortunately, it was found that the attributes of an acceptable material from which to construct an underwater vessel did not match up with commercially available glass compositions.

There are six attributes an acceptable material must have, ranked in order of importance. They are:

3. Availability of test criteria for establishing and maintaining quality assurance and control procedures during fabrication.

4. Accessibility to proven design criteria for the particular material.

Glass simply did not have these attributes in the 1960s and doesn’t have them all even today.

The first reaction to acrylic plastic is that it does not appear to be a feasible material for constructing pressure hulls. Its low compressive strength, low fracture toughness, and sensitivity to stress risers in tension make it a poor replacement for metal.

Fortunately, however, its strength-to-weight ratio makes it equivalent to low carbon steel; its plasticity permits it to tolerate large stress concentrations in compression; and its ability to adhere well to specially formulated adhesives makes it feasible to join acrylic structural shapes by bonding. 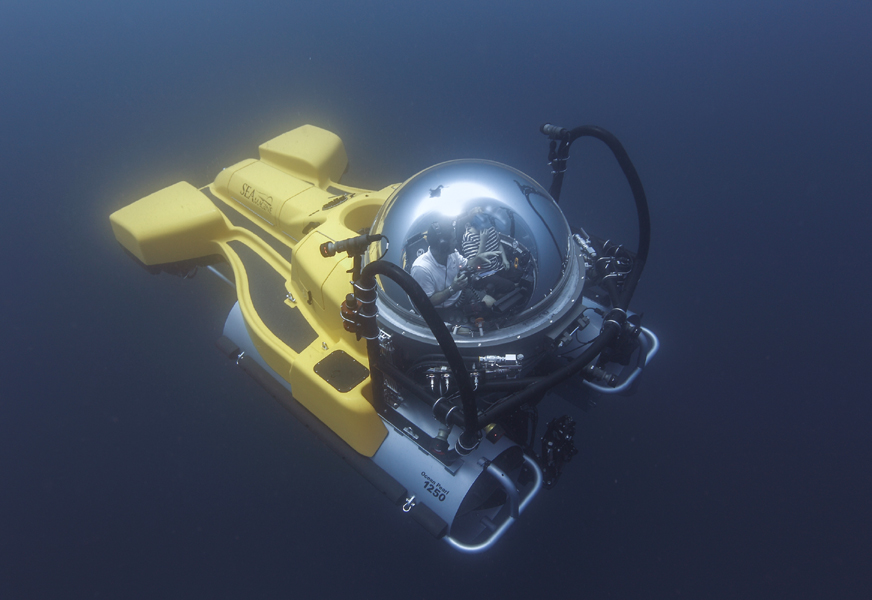 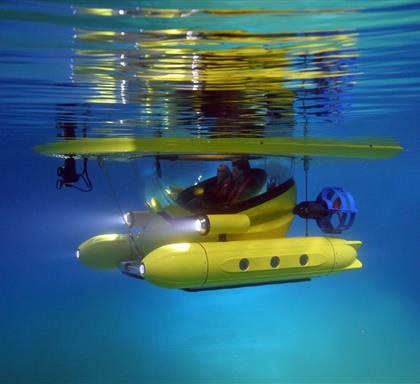 In addition, acrylic has very desirable optical qualities and is inexpensive in comparison to glass.

The fabrication of the early spherical shells was limited to free forming of small hemispheres from thin acrylic sheets by compressed air.

But even with all the limitations, the ocean engineering community saw the advantages acrylic offered to panoramic visibility.

Actual diving systems with the all-acrylic pressure hulls which demonstrated this potential were HIKINO, KUMUKAHI, and NUCOTE.

HIKINO was conceived in 1962 by the late Dr. William McLean and engineered by D.K. Moore of NOTS, China Lake (Reference 1.12). The two-person vehicle had the shape of a catamaran with the acrylic sphere suspended between the two hulls.

The acrylic sphere itself was assembled from two free-formed hemispheres mated at the equator to a metallic joint ring.

The vehicle successfully demonstrated the design concept of panoramic visibility but because it was free formed from thin commercially available sheets, the design depth was only 20 feet.

As a result of this severe limitation, it was subsequently used only as a concept demonstrator in a shallow swimming pool.

KUMUKAHI was conceived in 1967 by T.A. Pryor, engineered by Will Forman, fabricated by Fortin Plastics, and delivered to Oceanic Institute in Hawaii in September 1969.

The submersible was configured as a self-propelled diving bell with the batteries and a variable displacement tank contained in a pod suspended directly under the sphere. 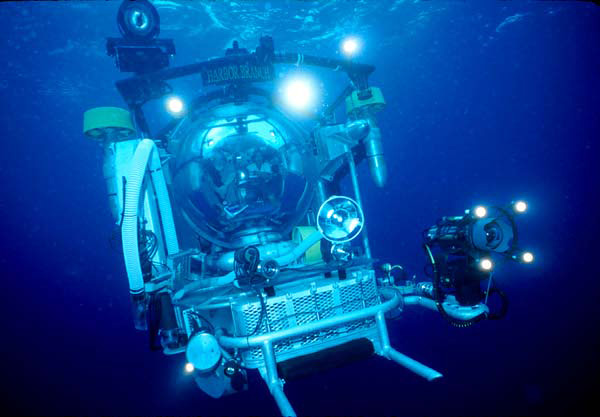 KUMUKAHI experienced extensive manned operational evaluation at snorkel diver depth and test data seemed to indicate that the pressure hull would be safe to 300 feet for manned dives.

Unfortunately, the vehicle was damaged in a freak collision with the support ship and its depth was derated to 90 feet.

However, it was never certified by the Navy or American Bureau of Shipping for commercial use. Lack of further financial support terminated this project. 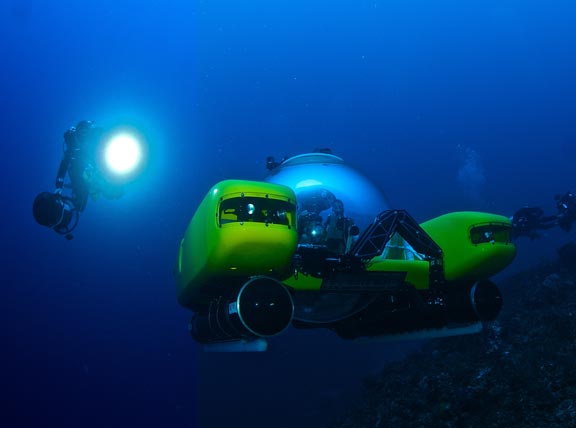 NUCOTE was conceived in 1969 by E. Rosenberg and engineered by Mike Cook and Ron Reich at the Naval Undersea Center, San Diego.

The two-man capsule was assembled from two free-formed acrylic hemispheres suspended by cable from an overhead winch on the NUC offshore tower. Air was supplied to the sphere by a flexible tube from the tower. The vertical movement of the undersea elevator was controlled from the interior of the sphere by its occupants.

It was placed in service in 1973 to a depth of 56 feet but after two years of service was taken out and placed in storage. As successful as the individual acrylic plastic hulls were in their application, they were not copied and applied by other designers to later diving systems.

The major reasons were (1) shallow design depths and small sizes, (2) absence of published design and test data applicable to larger acrylic spheres and greater depths, and (3) lack of approval for acrylic plastic
pressure hulls for manned vehicles by the U.S. Navy, American Bureau of Shipping, Lloyd’s Register of Shipping, or Det Norske Veritas.

Pioneering work in the development of design and fabrication criteria for acrylic plastic submersible hulls was initiated by Stachiw in 1961 and continued until 1990.

The opportunity to apply this experience to large submersible hulls presented itself after he moved to the Naval Civil Engineering Laboratory, Port Hueneme, CA.

While investigating the performance of acrylic plastic in windows for submersibles, he was approached in 1964 by J.G. Moldenhauer of the Naval Missile Center, Pt. Mugu, to assist the center in the design and construction of a tethered undersea observatory.

At this time (1964), there were no data available on the mechanical properties of the thick acrylic castings needed for man-sized pressure hulls, the strength of bonded joints between thick castings, the plastic creep of acrylic under sustained loading, and the corrosive effects of seawater on acrylic.

In addition, there was no engineering design or fabrication technique available for making a thick-walled pressure hull of acrylic and data were needed to make performance predictions.

It took six years of research to develop the data and fabrication techniques necessary to build NEMO (Naval Experimental Manned Observatory) (Figures 1.14). Sponsored by the Naval Facilities Engineering Command, NEMO was the first submersible with a nonmetallic pressure hull to be approved by the U.S. Navy for manned service.

The NEMO submersible was designed to be a one-atmosphere underwater observatory for 600 ft depth with lateral and vertical mobility. Vertical mobility was provided by soft water ballast tanks and a dead weight attached to an electrical winch located externally under the sphere.

Horizontal mobility was accomplished by two electric motor-driven propellers providing the submersible with a 2KT maximum speed capability. Sea trials performed under Navy supervision in 1970 were successful and NEMO was accepted by the U.S. Navy Facility Engineering Command for service in support of ocean floor construction projects. 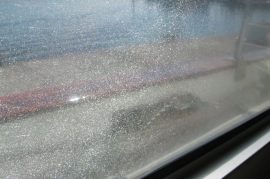 What to Look for When Selecting an Acrylic Sheet Provider 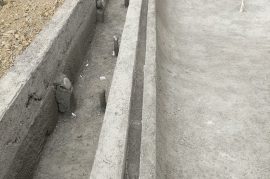 When it comes to acrylic sheet related leaks, whether in an aquarium, pool, submersible or other setting, there are three main causes and two of them are related to rebate. 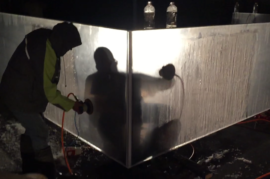 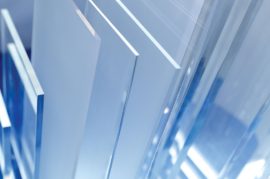 Simply click below to learn more about our acrylic solutions.